I worked with urban design consultancy cooperative urbed to launch Urban Scrawl, a journal which aims to explore some of the ideas and issues that practitioners come across in everyday work as urbanists – not things that we are being paid to look at, but things that we think are worth questioning and exploring further.

We hope you will feel inspired to join in the debate, or to let us know about other issues that you would like to see discussed in future editions. We plan to cover topics that range across all of urbed’s interests - urban design, regeneration, sustainability and community involvement – and also our own interests outside of the office. Please email me at urbanscrawl@urbed.coop.

URBAN SCRAWL IS LOOKING FOR SPONSORSHIP. If you would be interested in discussing a possible collaboration please contact me at Placeworks for more information. 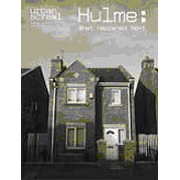 In the second edition of Urban Scrawl we put the illuminating Manchester neighbourhood of Hulme under the microscope. Members of the urbed coop are uniquely qualified to do this, having lived and worked in the various incarnations of this “mundane and radical” place from the 1970s to the present day.

In Issue 1, David Rudlin wrote: “The urban environment is something that affects all of us. The environments in which we live, where we go to work, meet friends and spend time with family affect who we are. Do we really want to live in some far-flung suburban cul-de-sac where we will meet no one except people like ourselves? Do we want to drive two hours in traffic to a soulless business park on a motorway junction? Do we want to shop in some fantasy of a shopping mall or a vast hypermarket where our every need can be met in a sanitised safe environment? We must want this stuff because until recently it was pretty much all we built.

Well not everyone wants to live like this! Some of us want to live and work in lively mixed-use, multi-cultural cities, bustling with life, full of independent businesses and creative people. Somewhere that has an authenticity that comes from its history rather than from the brush of a set designer. Somewhere that isn’t always spotlessly clean and locked outside shopping hours. Somewhere where you can meet people from every corner of the world and walk of life but where you can be anonymous if you wish.

This is called urbanism. It is something that was assumed for much of the 20th century to be alien to the English. The last decade has shown this not to be the case. Of course not everyone wants to live in cities and we must never make the mistake of forcing our personal utopia on others as the planners did for much of the last century. However the revival of the UK’s cities means that there is now an alternative to the cul-de-sac, business park and mall. The revival of Britain’s cities means that urbanism can now be found outside London, something that was last true in the 1930s. This is an urban renaissance born out of often heated argument and debate. The concept is simple but its realisation is complicated and involves jettisoning many of the principles that we have come to accept as given. Urban Scrawl is devoted to continuing this discussion and debate.”